Europa Nostra’s Board gives statement on the endangered heritage site of Hasankeyf, Turkey 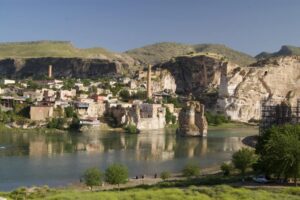 The Board of Europa Nostra, the leading heritage organisation in Europe, made a statement about theAncient city of Hasankeyf and its surroundings in Turkey, listed among the 7 Most Endangered heritage sites in Europe in 2016. In their statement, the Board of Europa Nostra deeply deplores the decision of the Turkish government to build a dam that would lead to the flooding of a site of world significance, without proper and transparent justification and without adequate compensation measures. In particular, the Board regrets that the removal of the Zeynel Bay Tomb has been carried out with insufficient consultation with the local and scholarly communities and that other Islamic monuments of great significance remain highly endangered. The Board of Europa Nostra urges the Turkish authorities to adhere to the standards of heritage protection that are included in the European Conventions and to set up a proper consultation process with local communities and civil society organisations concerned in an open and transparent manner.

Statement by the Board of Europa Nostra

The Board of Europa Nostra, meeting on 14 May 2017 in the framework of the Europa Nostra’s European Heritage Congress in Turku, Finland, was advised that the longstanding intention of the Turkish Government to move the Zeynel Bay Tomb, a monument featuring Timurid tradition, has now been completed, as part of the ongoing government project to build a dam that will lead to the flooding of the archaeologically and architecturally important site of Hasankeyf on the river Tigris.

It is to be regretted that this removal has been carried out without sufficient documentation having been provided and certainly with insufficient consultation either with the local or with the scholarly community, both of which believe that the value of the site of Hasankeyf is far greater than the benefits to be obtained by its flooding. It is to be even more regretted that other Islamic monuments of great significance including the medieval bridge of the 12th century of the Artukid dynasty, the 15th century mosque complex and tomb of the Ayyubid Sultan Süleyman and the Imam Abdullah tomb, remain at risk. For all these reasons, Hasankeyf was included on its 2016 List of 7 Most Endangered sites in Europe, as part of the programme run by Europa Nostra in partnership with the EIB Institute and the Council of Europe Development Bank.