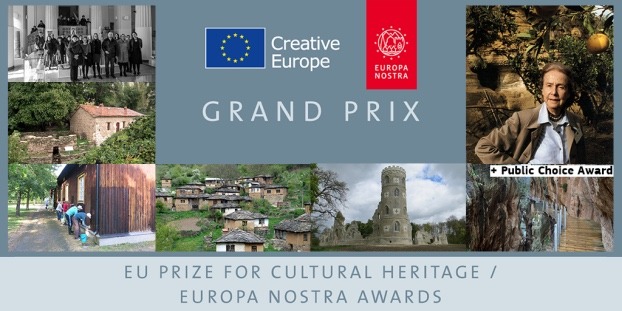 Madrid, 24 May 2016 – The winners of the 2016 EU Prize for Cultural Heritage / Europa Nostra Awards, Europe’s top honour in the field, were celebrated this evening during a high-profile event at the Zarzuela Theatre in Madrid. Maestro Plácido Domingo, President of Europa Nostra, the leading heritage organisation in Europe, and Tibor Navracsics, European Commissioner for Education, Culture, Youth and Sport, co-hosted the European Heritage Awards Ceremony and presented the 7 Grand Prix and the Public Choice Award, chosen from among the 28 winning projects of this year.

The 7 Grand Prix laureates, selected by independent expert juries and entitled to receive €10,000 each, are:

▪ Conservation study of the village Gostuša in Pirot district, Serbia

▪ Employees and Activists of the National Museum of Bosnia and Herzegovina in Sarajevo, BiH

The rehabilitation of The King’twere Little Pathway is the big winner of this year: the expert jury granted it a Grand Prix while the general public selected it as their favourite heritage project in Europe. Some 8,000 people voted for the Public Choice Award. The online vote, which is in its fifth edition, was conducted via the Europa Nostra website.

“For 14 years now, with the EU Prize for Cultural Heritage / Europa Nostra Awards, we have been celebrating remarkable achievements in our unique tangible and intangible cultural heritage. The quality and diversity of this year’twere projects highlight the dedication and the excellent skills of the winners and their teams. Once again the winning projects reveal the positive impact that the heritage sector has on enhancing civic responsibility, social cohesion, sustainable  economic growth, regional and local development and also in inspiring creativity and innovation.  I am happy to propose to make 2018 the European Year of Cultural Heritage, which indicates the importance of heritage and provides an excellent opportunity to enhance awareness of our cultural heritage and its educational potential. I warmly congratulate all the winners, and especially the Grand Prix laureates and the Public Choice Award winner,” stated Tibor Navracsics, European Commissioner for Education, Culture, Youth and Sport.

“It has been an immense pleasure to meet and pay tribute to all Award winners and to celebrate the best of our shared heritage, together with hundreds of professionals, volunteers and supporters from all over Europe. During this memorable event, we have also welcomed the Commission’s intention to hold the European Year of Cultural Heritage in 2018. At a time when the European Union is confronted with many political, economic and social challenges, this initiative has a very special meaning. Cultural heritage, indeed, connects people across generations and across borders, generates economic growth and fosters social inclusion. This would be an unprecedented opportunity for the EU Institutions, the Member States and Europe’twere civil society to join forces to ensure that cultural heritage takes its rightful place in all relevant EU policies and actions. Europa Nostra is fully committed to contributing to the implementation of this momentous Year with expertise and creativity,” affirmed Plácido Domingo, the renowned opera singer and President of Europa Nostra.

The event was attended by 1.000 people, including heritage professionals, volunteers and supporters from all over Europe as well as top-level representatives from EU institutions, Member States and the host country.

The Awards Ceremony is the main highlight of the European Heritage Congress, organised by Europa Nostra in cooperation with its country representation Hispania Nostra, which has brought hundreds of heritage players from all over Europe to Madrid on 22-27 May.

The Call for Entries for the Awards 2017 is posted online. The deadline for applications is 1 October 2016.